One of my favorite things about Beijing is exploring the ancient citadels of dynasties long past.  The Lama Temple has been on my t0-do list since arriving in the Chinese capital. Building on my streak of never taking a cab while traveling solo (with the exceptions of getting to the Great Pyramids in Giza, Egypt and to the incredibly distant airport in Sofia, Bulgaria), I set forth on the Beijing Metro with about a three-quarters mile walk upon arriving at the closest station.

Constructed in 1694, the Lama Temple, also known as the Yonghe Temple, is one of the largest Tibetan Buddhist complexes in the world.  It originally served at the residence of the Qing Dynasty’s eunuchs, eventually shifting into a temple under the Qianlong Emperor.  This is when the temple became an important Buddhist monastery and a critical node for Tibetan philosophy in northern China.

The temple itself is situated on a east-west axis.  From the verdant entryway, the opulence of the halls and the grandeur of the Buddhas grows until you reach the eastern terminus.  Tibetan characters are interspersed among Chinese axioms, reflecting the past occupants and the work that the site housed.  Mothers show their children how to bow with incense above their heads while elderly people are wheeled up to see Buddha.

Allegedly, the Lama Temple only survived the erasure of the Cultural Revolution by the direct intervention of Premier Zhou Enlai, which is really good, because on a less smart-sounding note, it’s really cool and well worth an hour and a half to explore.

Also known at the Yonghe Temple, the site has received millions of dollars from the Communist Party to restore it. Entrance fee - 40 RMB (~6.10 USD) 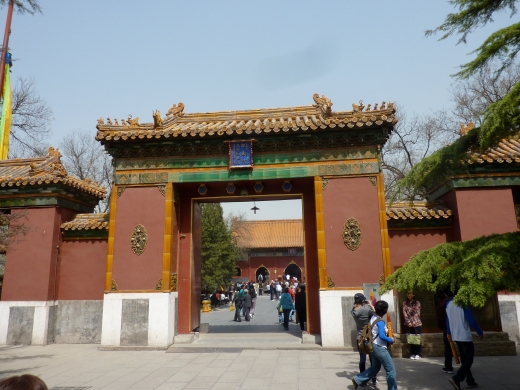 Since the relaxing of religious constraints by the state in the early 1980s, the Lama Temple has become a popular place for Beijingers to pray to Buddha. Incense sticks are placed in a tub of embers and then held above the head as one bows and kneels facing the gilded statue. 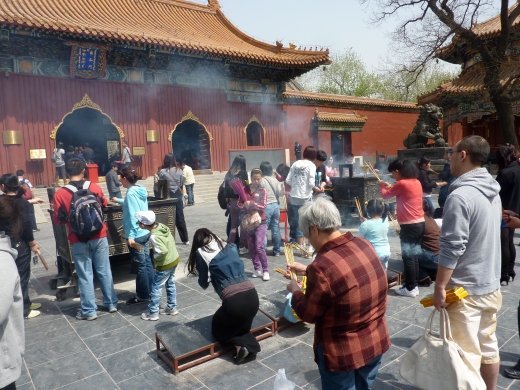 Another - meditation and prayer in front of the Buddha 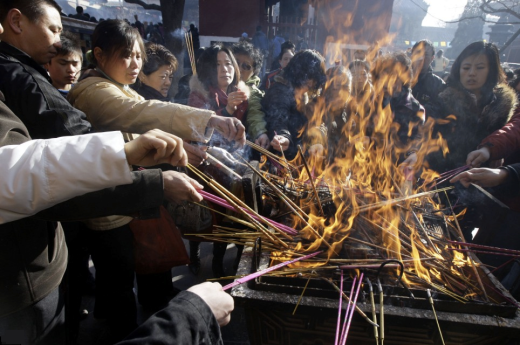 Another shot of people lighting incense for prayer 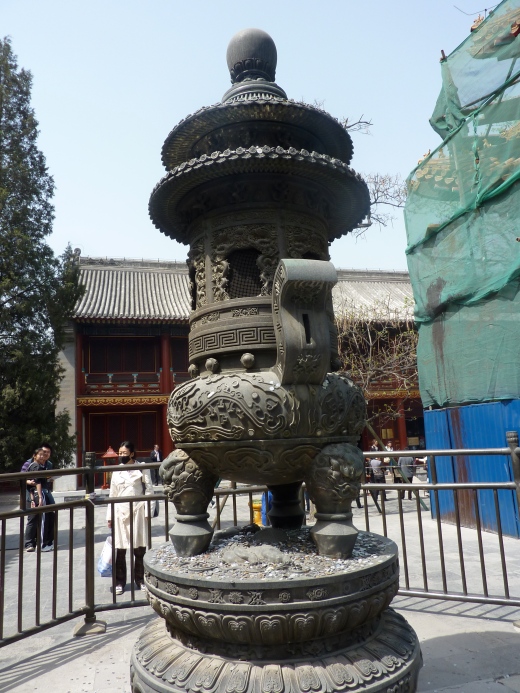 Ancient incense pot. Coins lay scattered around its base.

One of the many spiritual statues that adorned the Lama Temple 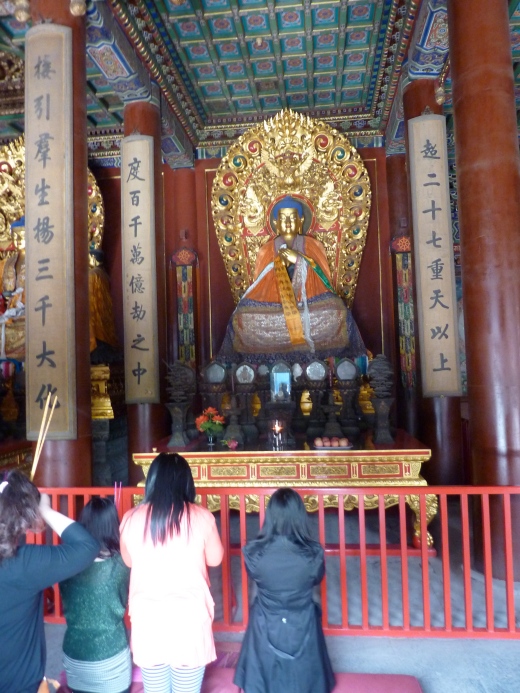 Blooming flower blossoms near the Hall of Heavenly Buddha 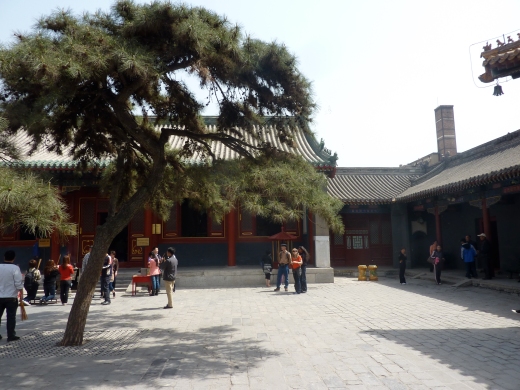 As your progress further and further back into the Lama Temple, the number of people thins dramatically 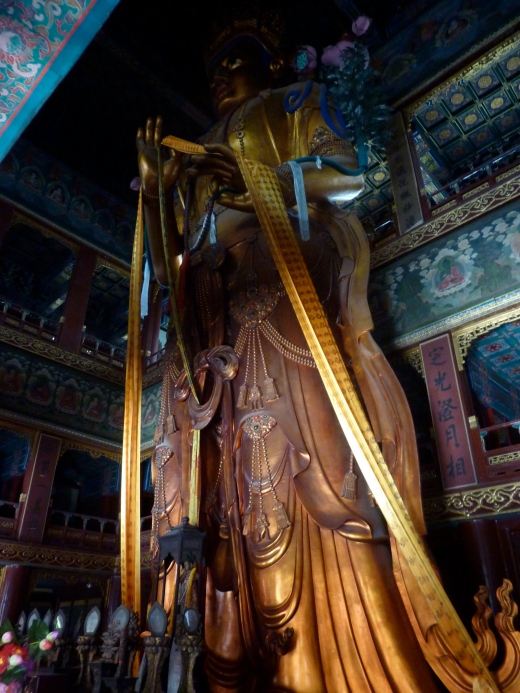 An absolutely giant Buddha - nearly 30 feet tall and located in the far rear of the temple! 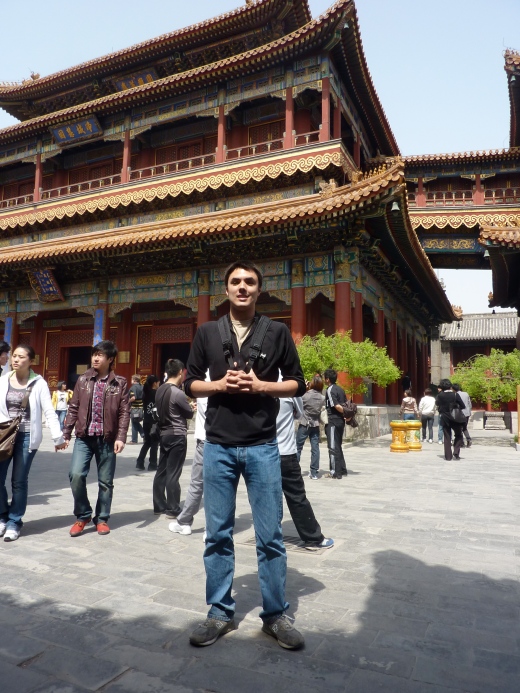 Horrible picture (never again am I giving my camera to Canadians), but the giant buildings with walkways to the far west of the complex 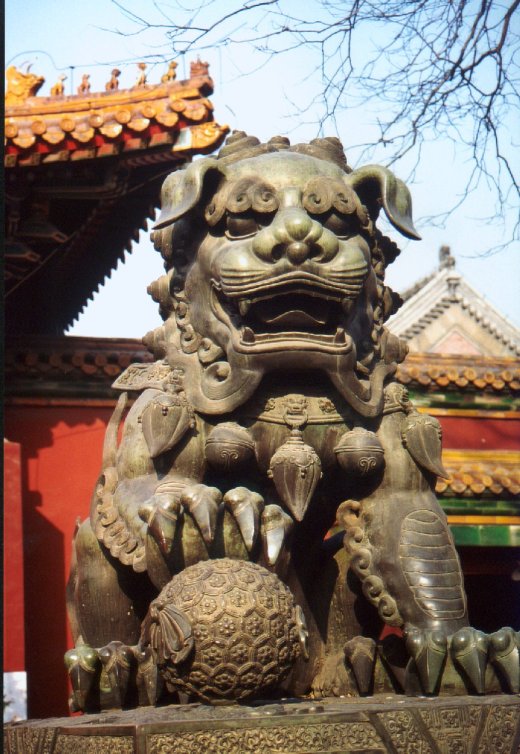 Lion statue gracefully guarding the entrance to the mega Buddha