With 8 days before I meet my friend Paul in London, my original plan was to visit Alexandria and head back to Tel Aviv, winding out a massive Egypt journey.   Instead, I was able to book a last-minute (9 hours before the flight left) flight to Istanbul from Cairo on Turkish Airlines.

Istanbul, heralded as one of the world’s greatest cities, is somewhere I have wanted to visit for a long time.  The seat of the under-appreciated Ottoman Empire was in Istanbul.  The city itself looks and feels European – in fact, 75% of the city is on the European side of the Bosphorus, the narrow strait that connects the Black Sea and the Mediterranean Sea and splits Europe and Asia.  Istanbul is made of 3 peninsulas that almost touch, allowing the sea to split the continents in between.  The westernmost 2 comprise the European side of the city.  It is here where most of the Ottoman capital was and where most of the city’s life is centered.

Coming from Cairo, Istanbul feels a world away.  In Egypt, I saw maybe 2 women without their head covered.  After being in Istanbul for a few days, I’ve seen maybe 2 women with their head covered.  People have Lady Gaga as their ringtones and drink carmel lattés as the setting sun illuminates the ancient skyline against the black waves of the Bosphorus.

Istanbul reminds me very much of Tel Aviv (which is not something I bet either party wants to hear right now!).  In very secular Tel Aviv, the people there want there to be synagogues in the city, but don’t actually want to go to them.  Instead, they party and play on the beaches.  In Istanbul, it appears the same way.  Turkey is a very secular nation, much to the surprise of Westerners.  It retains its Muslim heritage – it was, after all, where the Ottomans made their capital – but only barely.  Gracefully domed mosques line the skyline as modern Turks enjoy local beer and cigarettes in their slender shadows.

Trying to save a few lira, I took the Metro from the main international airport to my hostel in the really area of Old Istanbul called Sultanahmet, the location of most of Istanbul’s most famous gardens, mosques, and palaces.  While the whole public transit system is called the Metro, only part of it is a subway – a lot is a really quick light rail system and another part on the northern peninsula is a cable cab.

Arguably two of the most impressive piece of architecture in history and the jewels in the Ottoman crown, the Aya Sofya (known as the Hagia Sofia in English) and the Blue Mosque sit across from one other with a large park in the middle.  I spent a while here, buying food from peddlers (kebabs are of Turkish origin, so they are everywhere!) and watching the slow turn of the world. Anyway, a few pictures, ok? 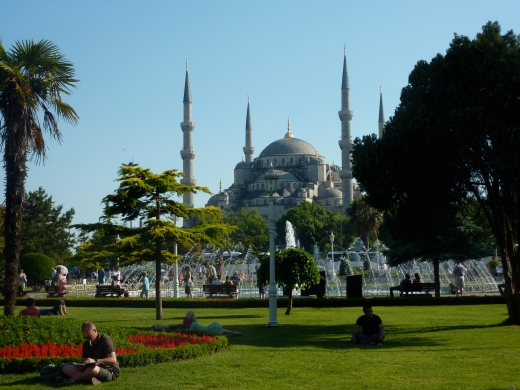 First glimpse of one of Istanbul's most famous sites, the Blue Mosque. My hostel is about 250m from here. 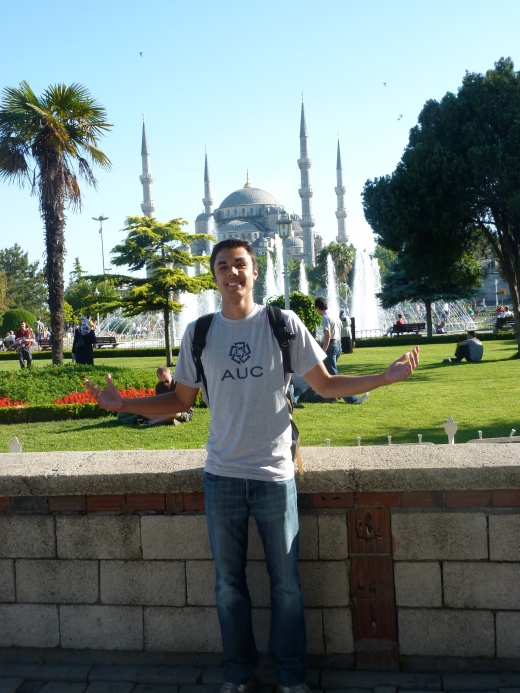 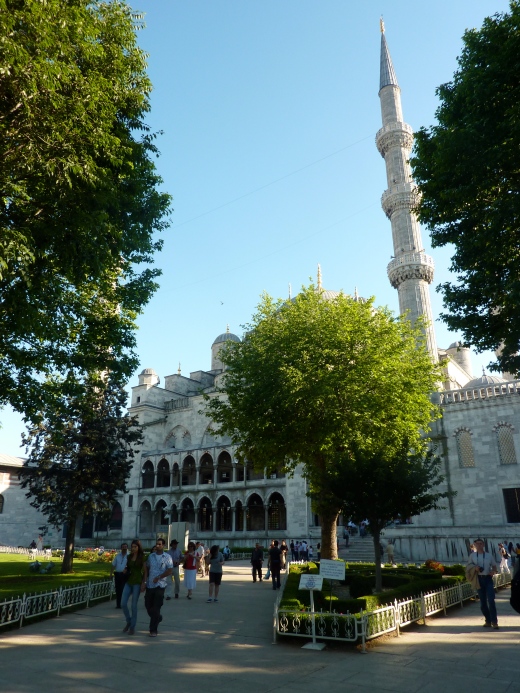 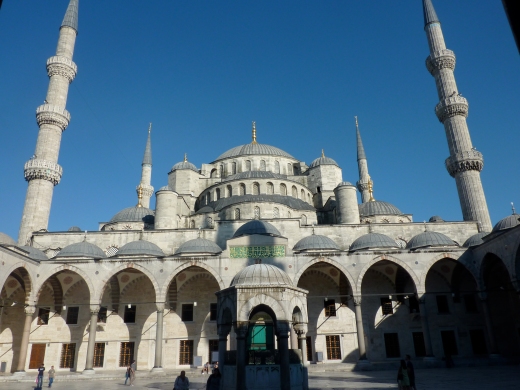 The Blue Mosque from the inside plaza 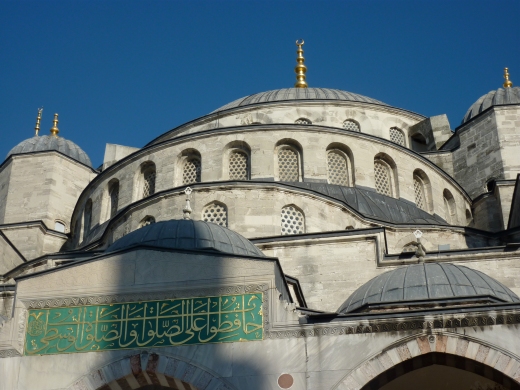 Close-up of the fancy Arabic inscription and the domes 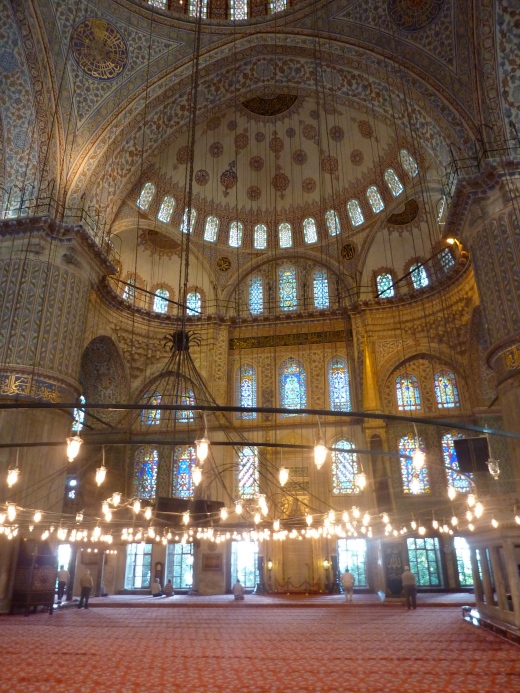 Shoes off, inside the Blue Mosque 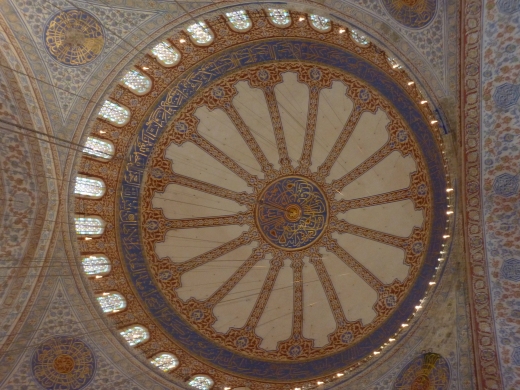 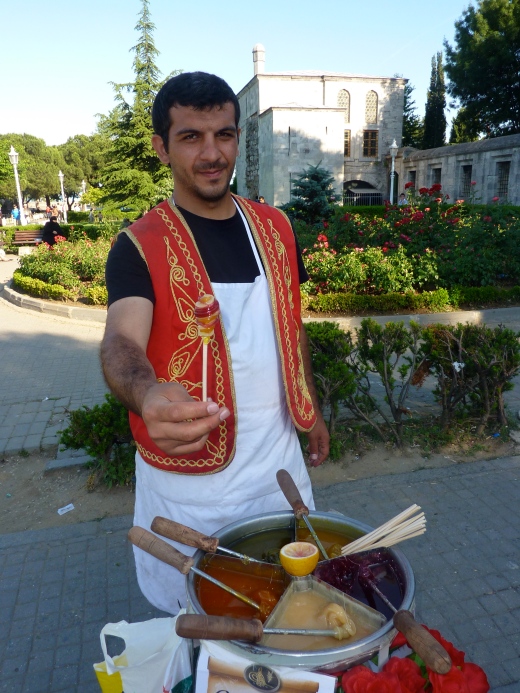 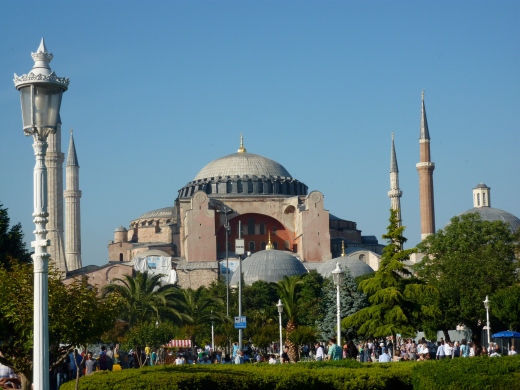 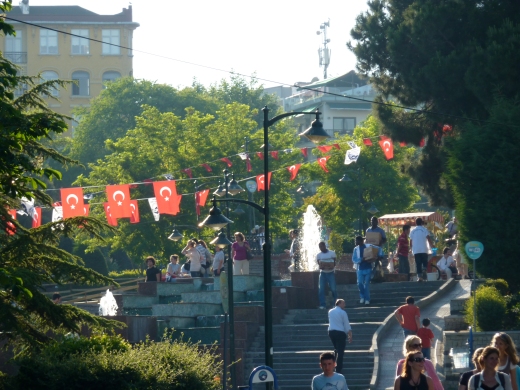 Turkish flags fly over the bustling market-park area of Sultanahmet, the heart of Istanbul 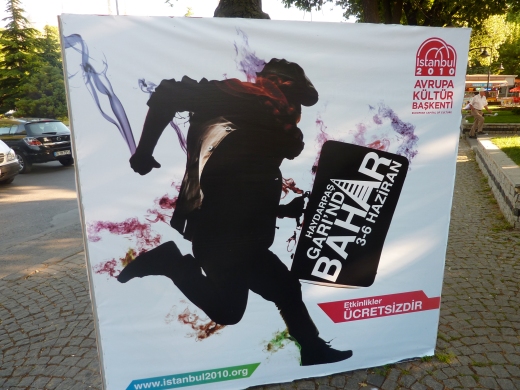 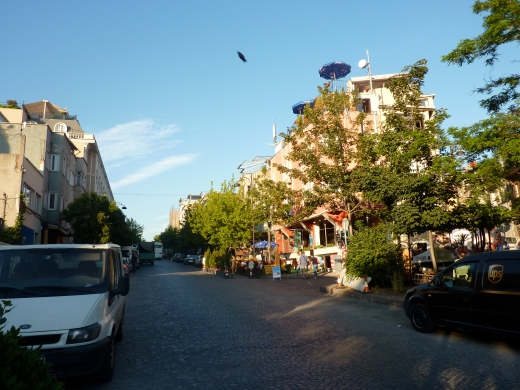 Making my way to the sea. My hostel is only about 100m from the water - the path there snakes through idyllic streets 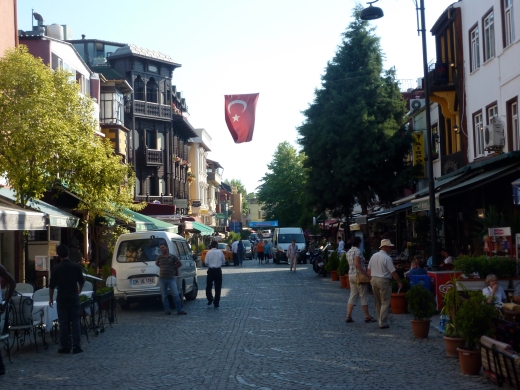 Still winding my way through Sultanahmet to the ocean... 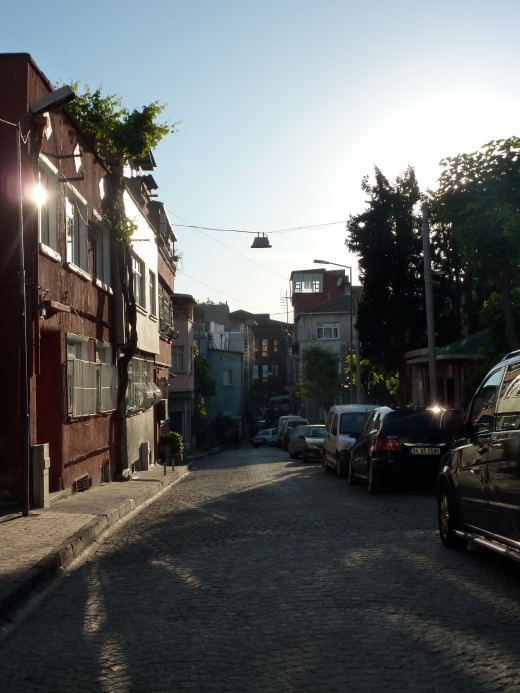 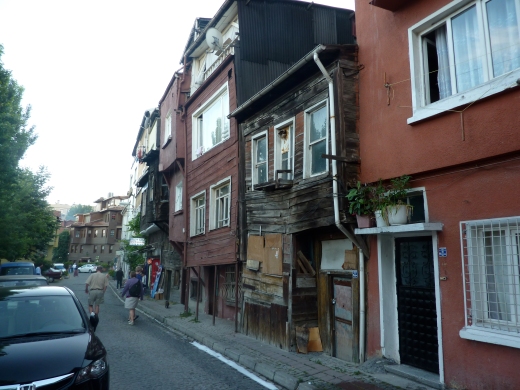 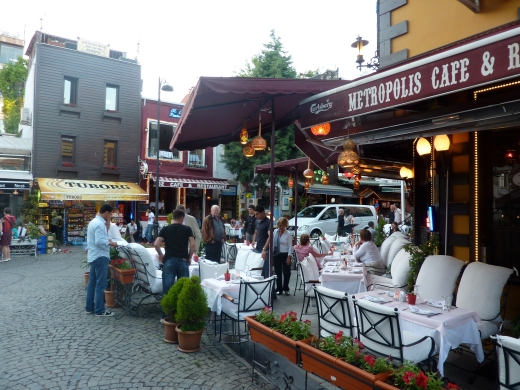 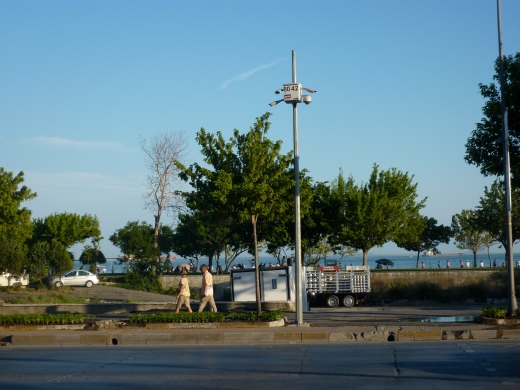 First glimpse of the Bosphorus. I realized I went in a square...that's why the "100m" took 15 minutes! 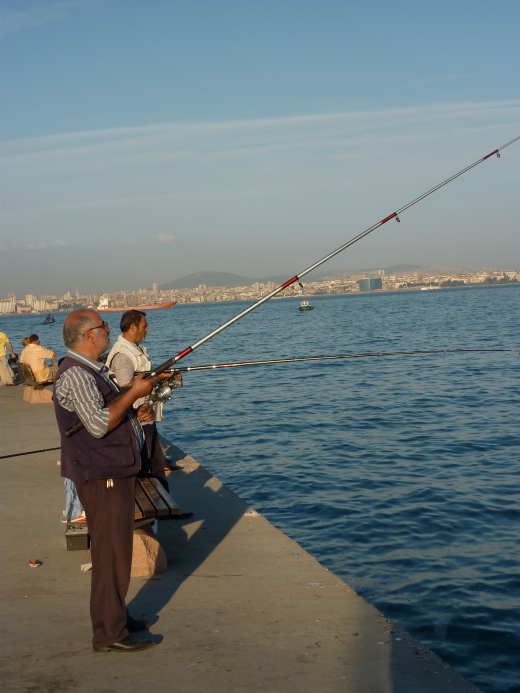 Men fishing along the water's edge. In the distance, still Europe, but a different peninsula called the Golden Horn 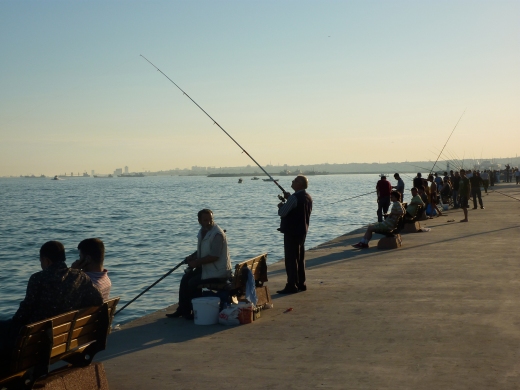 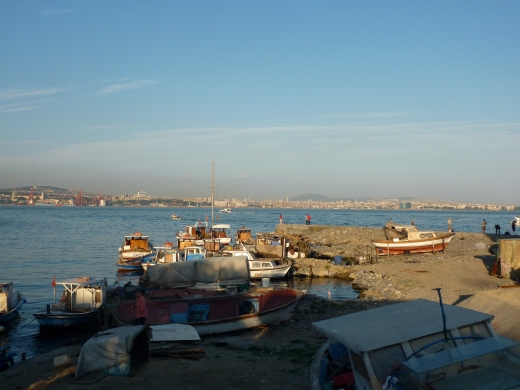 The two side of Europe 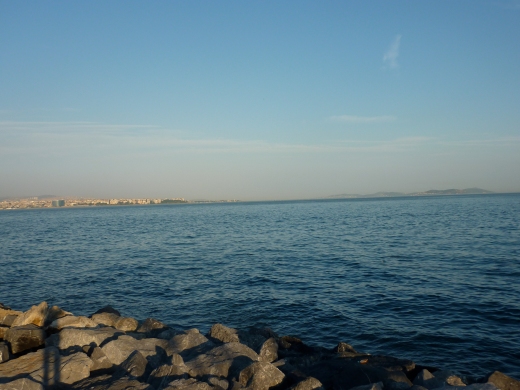 The three peninsulas. The very far one on the right is Asia. 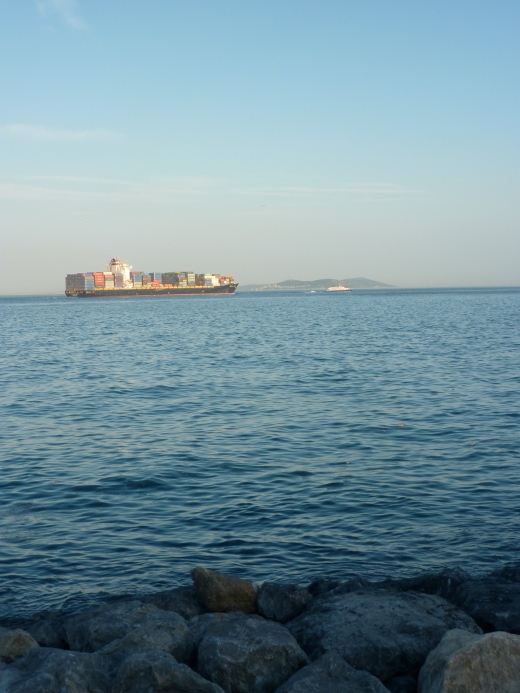