East of Eden…or at least the Nile

After 2 full days in Cairo (I’m spending 3 more full days here toward the end of my trip) visiting the Pyramids at Giza, seeing the mummy of Ramses II, and dining on local Egyptian fare, I took the night train to Luxor.  Luxor is a city about 450 miles south of Cairo – the train is supposed to take about 10 hours, but on Egyptian time, it really takes closer to 12 (the conductor needs to smoke and chat at the platform for an hour after we were supposed to leave…).

Luxor is incredibly hot.  It’s 400 miles in every direction to escape the wild Sahara – naturally, the high temperatures are almost always over 100˚ this time of the year.  Also, I saw so many Europeans in Luxor.  I met 1 other American; the rest, all older, upper-class Euros.  I saw an Egyptian man sell a English man some tourist junk (for $250!), praising his country in a way that was so transparent that I am shocked the man did not realize this.  He told the old bloke that “Egypt was very prosperous when the English were here!  Thank god it wasn’t the French!”  I am sure he would have no probably blasting the British for their colonialism and heaping praise on the French if such a person entered the store.  Clearly they pander to their audience, no matter the nation.

Anyway, Luxor itself is home to two main sites, the Luxor Temple and the Karnak Temple.  As my worn Lonely Planet suggests, the Karnak Temple is arguably the most impressive site in all of Egypt, even more so that the Pyramids.  I am inclined to agree.  Both of these temples, but especially Karnak, are full of amazingly well preserved statues and obelisks replete with ancient hieroglyphics.  They speak of a bygone age, whispering ancient secrets to those that pass underneath their mighty shadows.

Both of these temples are on the east bank of the Nile.  The Valley of the Kings, along with some other sights, are spread far out on the west bank (the Egyptians didn’t bother building a bridge, so a short 20 cent ferry crossing is needed).  The first day in Luxor, I stayed on the east bank.  The west bank will be for a future post. 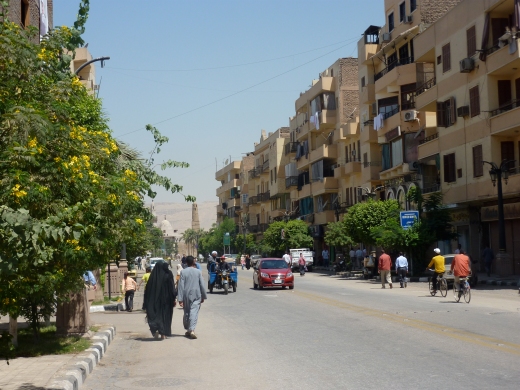 The Luxor train station - my link to Cairo 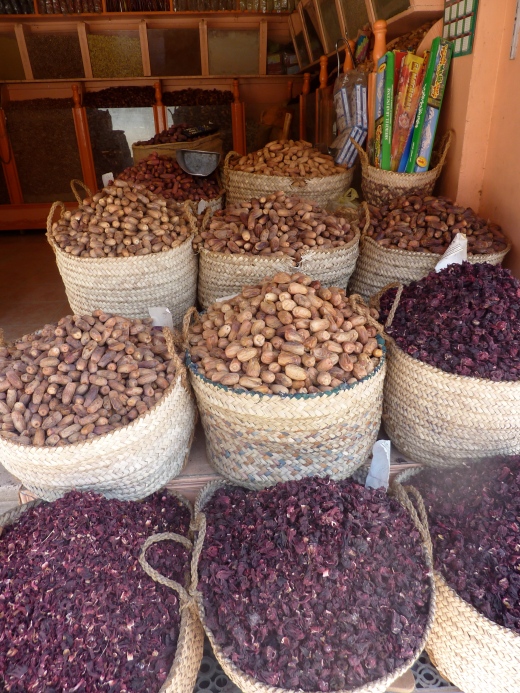 Spices like these were in sacks in stores all around Luxor

Approaching the Luxor Temple on the east bank of the Nile

Built on the ancient city of Thebes, the Luxor Temple was constructred in 1400 BC. 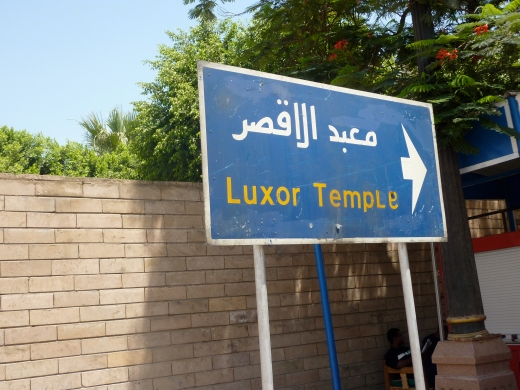 Badly placed sign. Not only was the Luxor Temple the other way, I was already inside the complex and already paid... 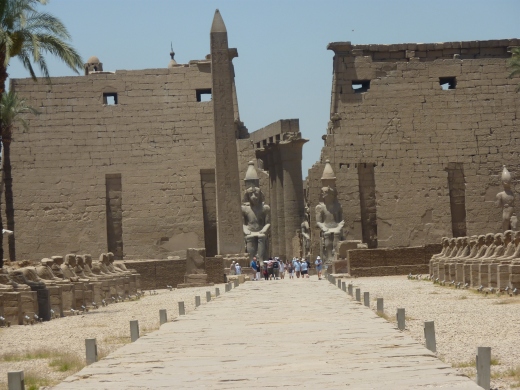 The entrance to the Luxor Temple, surrounded by the Avenue of the Sphinxes

The colossi of Ramses II guard the entrance

An obelisk marks the entrance plaza of the Luxor Temple 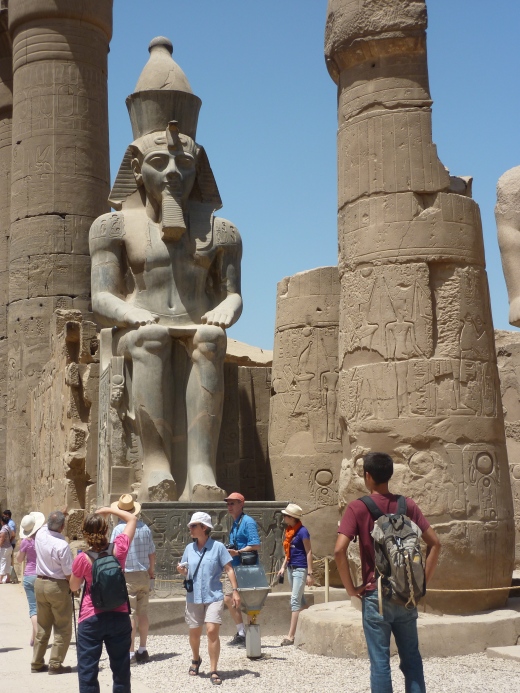 Me (with backpack in lower right) in apparent contemplation 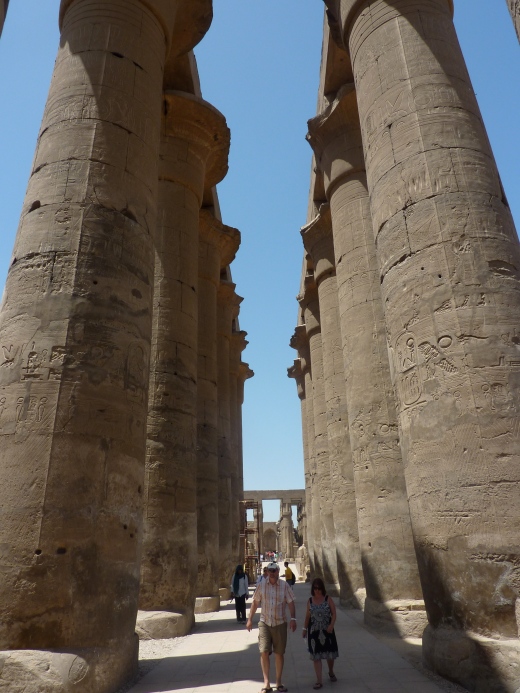 The Colonnade - the main entrance into the depths of the temple 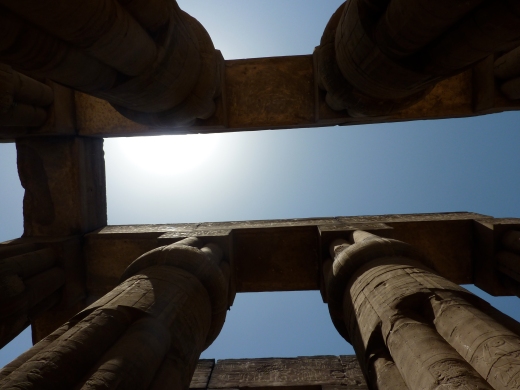 Hieroglyphics were all over the inside the Luxor Temple

More hieroglyphics dedicated to the mother goddess Mut and the king of the gods, Amun-Ra

My school - from Chicago to southern Egypt!

The Avenue of the Sphinxes is the ancient road leading from Karnak Temple in the near north to the Luxor Temple in the south. It is currently still being excavated. 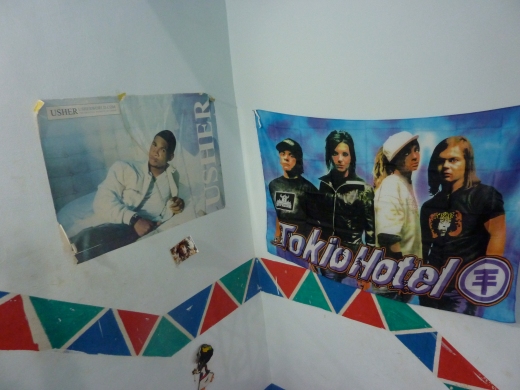 Checking into my hostel, the Bob Marley Home, in Luxor after a hot day of exploring the Luxor and Karnak Temples. The theme was, well, interesting. 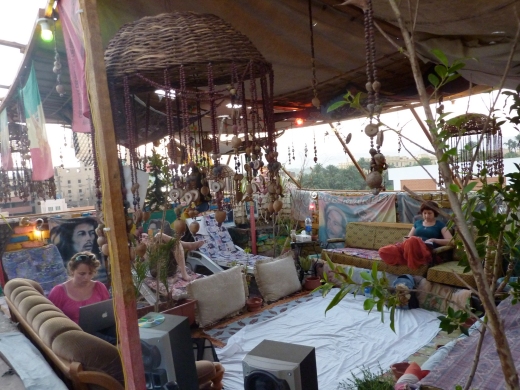 The rooftop was pretty sweet, though. Couches, blankets, and hammocks made watching the sun set over the Nile really nice.