Today…wow.  Everyone has seen the Pyramids in book and movies since childhood.  Seeing them so many times sort of numbs you to their magnitude, but seeing them in real life, you are inspired of their awe that must have been unworldly 4000 years ago because they are amazing even today.  This marked the half way mark.  I have officially seen over half of the New Seven Wonders of World, with the Pyramids being number 4 (the others I’ve seen: Machu Picchu in Peru, the Christ the Redeemer Statue in Brazil, and Petra in Jordan).

I traveled to the Pymadis of Giza by way of the Cairo Metro, getting as far as I could before taking a short cab ride.  The middle-class suburbs of Giza, itself a suburb of Cairo, run literally right next to the Pyramid complex.  Pictures of the Pyramids are always taken facing one direction, as the in the other way, there is a bustling city only a few hundred feet away.

Inside, there are people who want to sell you everything.  From donkey, camel, and horde rides to “real” Egyptian artifacts and papyrus stuff, everyone is super imposing.  Some guy asked me if I wanted my picture taken – for free.  That should have been my first clue.  If you have to say taking a picture is free, it’s not.  I had to give him a few bucks to get my camera back.  Walking throughout the giant sandy complex, I saw many, many people angrily asking for their camera back or trying to avoid a pestering man begging for money.

Besides that, the Pyramids were awesome.  They are so incredibly tall, made all the more amazing given that they were built over 4000 years ago (they are just slightly shorter than the Cairo Tower in the last post).  They used to be covered in a slick plaster that the Egyptians made, but this was used back in teh day when Cairo needing building material.  Only the top part of the middle one, the Pyramid of Khafre, remains in the original plaster.

Entering the complex from the dusty suburbs of Giza. 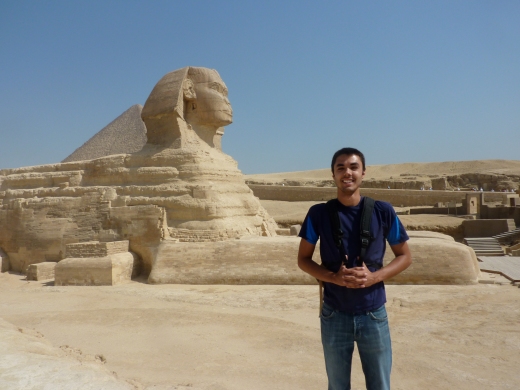 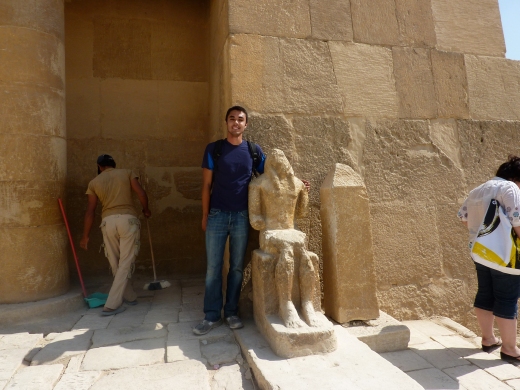 Me + ancient statue at the Temple of the Queens + cleaning man

On top of a camel in front of the Great Pyramid

No nose on the Great Sphinx of Giza

Giza runs right up the complex

The original plaster made 4000 years ago. The rest has been removed by modern Cairenes to build their city.

Some man that was obseesed with me trying to buy a camel ride. I tried speaking to him in Hebrew, but he still followed me. 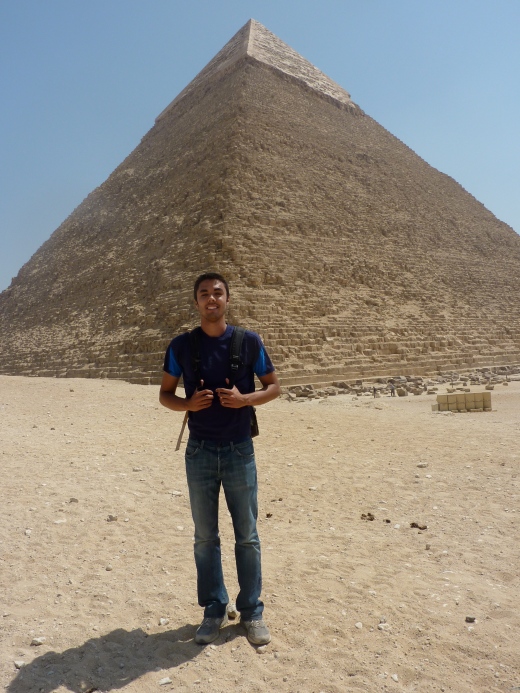 Me in front of the pyramid with the plaster on top, the Pyramid of Khafre

Slowly making my way out of the Giza compound. Sphinx with Pyramids of Khafre and Menkaure in the background

All 3 Pyramids and the Sphinx near the entrance/exit 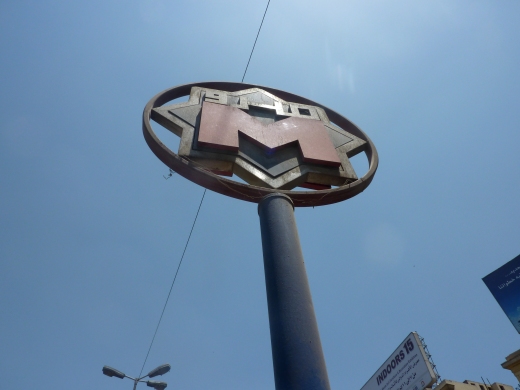 The Sadat Metro station - my frequent link to Greater Cairo