Cairo…the largest metropolitan area in Africa, one of the world’s most populous city.

The start of my around the world trip…I left Jerusalem, planning to reach Cairo (over almost 1000 km away) in one day.  Most groups traveling from Jerusalem or Tel Aviv take the bus down to Eilat, the Israeli city on the Red Sea, and spend the night, crossing into Egypt the next day.  I wanted to do it all in one day.  I left Jerusalem at 7 AM, arrived in Eilat around 11:30.  I then crossed the border into Taba and waited for a shared taxi to run.  I finally made it across the Suez Canal and into Africa, arriving in Cairo around 10 PM.

I met a bunch of awesome solo travelers.  Once the four of us arrived in Cairo, we were in the fishbowl – people were very curious to see four people showing up in shorts and in large backpacks in the middle of a street where cars, people, and animals compete for space.  We took the Metro, the only subway in Africa, to downtown, where we grabbed some kushari (picture below).

Cairo is a big and dirty city, but it has a very European feel.  The buildings near downtown where I am staying, and the ones all along the Nile, could be found in Madrid or Brussels.  Known as the City of a Thousand Minerets, the skyscrapers of Cairo are intermixed with crescent moon adorning the tops of mosques.

My first day in the city I visited the amazing Egyptian Museum.  The pictures show it better (cameras weren’t allowed in, so I had to sneak some with my phone – apologizing in advance for their grainy quality).  Seeing the mummies – especially of Ramses II – was so awesome.  Then I explored some of the neighborhoods and sights of the city.  I went and saw the Foreign Ministry and the Arab League, but quickly learned that the Egyptians do not like you taking pictures of anything remotely political (I was yelled at for just stopping in front of the Arab League HQ to look through the fence).  Post offices, subways, trains, some major overpasses, and some bridges are off-limits, I was told.  I’m not sure of the reasoning behind this – recon?  Two words: Google Maps.

Last night I went with two other solo travelers I met at the hostel to a Sufi dancing show.  It was really cool – the Whirling Dervishes sang and spun while men in the background beat on drums.

Anyway, pictures are really the most important part… 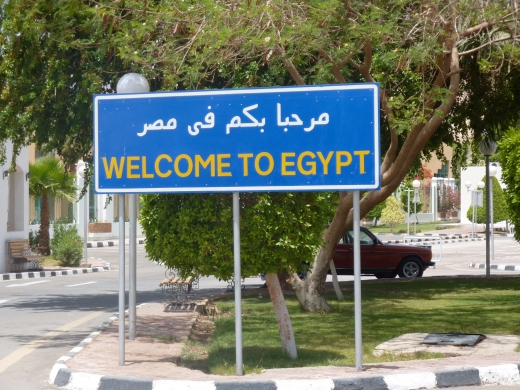 One step into Egypt! 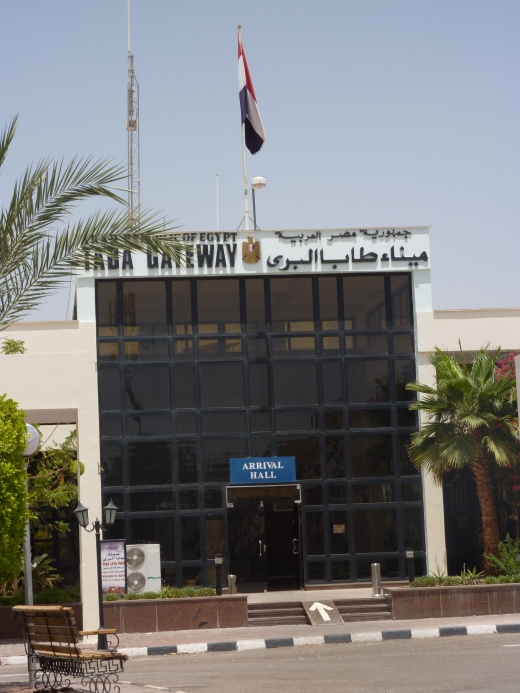 Being processed at Egyptian immigration in Taba

Sun over Sinai...nearing the Suez Canal

The next morning. Right outside my awesome hostel in downtown Cairo

European-looking buildings like this are all over downtown Cairo 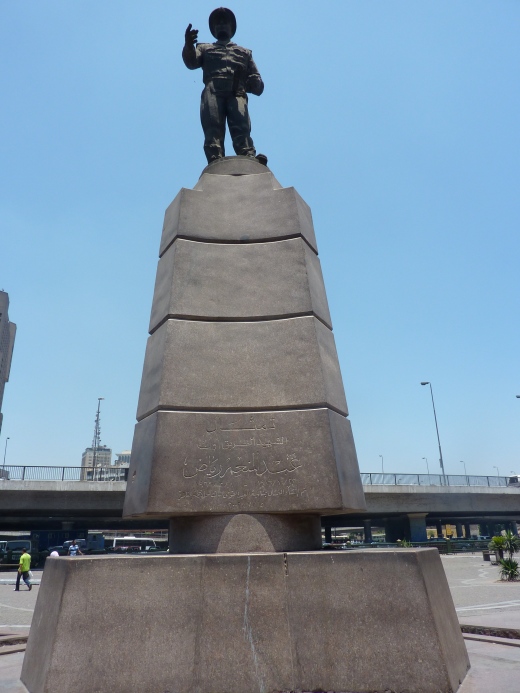 Nearing the Egyptian Musuem. The Egyptians have statues of their past leaders everywhere.

Traffic in Cairo is like playing a real life version of Frogger, except you only have 1 life. People cross 6 lane roads one lane at a time, ensuring you are never less than 4 inches from a racing car... 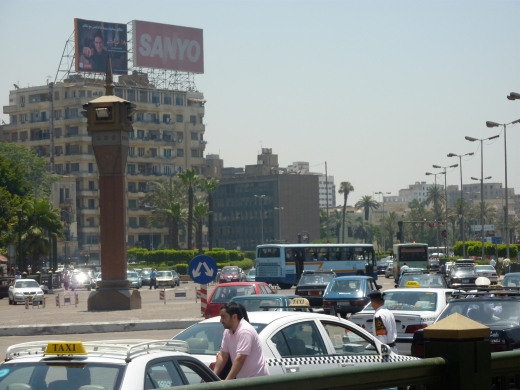 Ugh, so much traffic. Even at 2 AM, police officers are directing the huge load of cars. But at least there's lots of palm trees!

The front of the Egyptian Museum.

Side view of the museum with some ancient Egyptian carvings and the Egyptian flag in the foreground.

The main hall of the museum 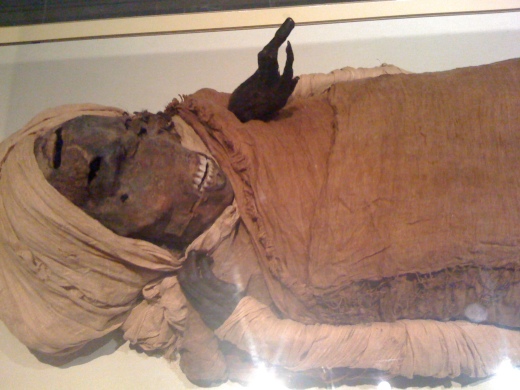 This guy was in a battle and had knife wounds in his face.

The jewel of the main hall 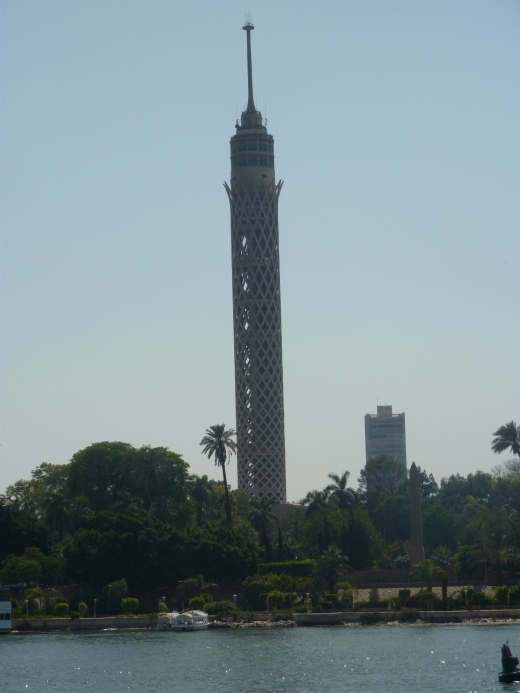 The Cairo Tower, the tallest building in Cairo at 614 ft, just edging at out the Great Pyramid of Giza. Located on Gezria Island in the Nile River. 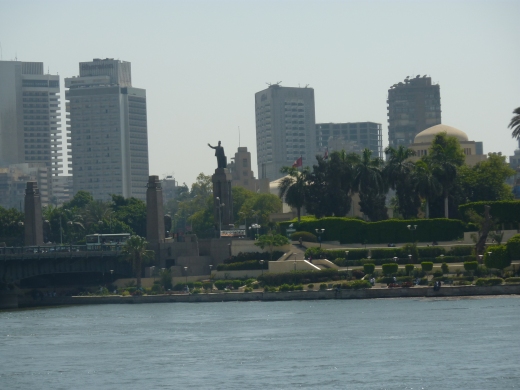 The areas around the Nile are prime real estate. As such, they are super nice.

Walking across the October 6th Bridge. The date commemorates the outbreak of the Yom Kippur War against Israel. 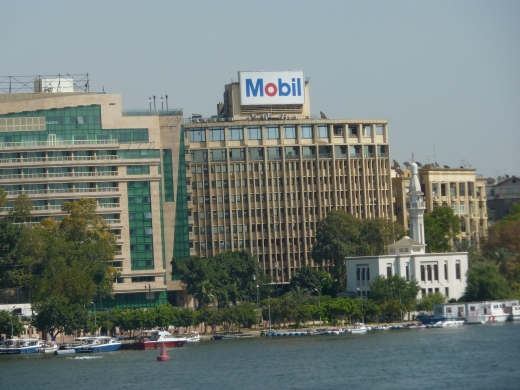 A beautiful park on Gezira Island

At the base of the Cairo Tower

Neat and huge base plaza of the Cairo Tower

Open-air theater for the Sufi dancing. As everything in Egypt, it started half an hour late.

Blurry, but everyone was moving so fast. THis man was spinning for well over 10 minutes while the guys in the background sang and played on their instuments.

1 Response to A Thousand Minerets